Kyle Snyder, AWOL in America, Travels and Speaks Against U.S. War on Iraq 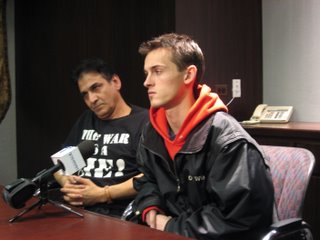 I continue to travel with Iraq war veteran and resister, Kyle Snyder, who remains AWOL after returning last week from Canada and attempting to be discharged from the Army. Right now we are in Chicago, where Kyle spoke to a well attended press conference on Monday, calling on the people of Illinois to vote against the war policies of the Bush administration. (They did, supporting a referendum to withdraw U.S. troops from Iraq by an 8-1 margin!)

We are finding lots of support in Chicago, from veterans groups, military familes, peace groups and others. Kyle has been speaking in public forums and to university students. There continues to be a lot of national and international media interest in Kyle's struggle to be discharged from the Army.

On Thursday, Nov. 9, at 11 pm EST, Kyle was interviewed on the Alan Colmes radio show, which airs on 60 radio stations throughout the U.S. His 30-minute interview then generated another hour-and-a-half of discussion with calls from veterans who testified about war crimes in Iraq and Vietnam as well as recruiters' lies. To hear this interview, go go http://www.foxnews.com/radio/alancolmes/index.html

The Army has not yet given a reasonable response to our call for Kyle to be released from military service without any punishment. At one point, Kyle had been willing to accept an Other Than Honorable discharge that we understood the Army was offering him. But this deal evaporated when he presented himself to Army authorities at Fort Knox, Kentucky.

So Kyle is AWOL again. (AWOL's new meaning: "A War Of Lies") At the risk of arrest, he is speaking out bravely on behalf of war resisters and active duty GI's. His old unit, the 94th Engineers, now based at Fort Leonard Wood, Missouri, is slated to return to Iraq in January for the 3rd time. The Army wants Kyle to return to that unit, and will not say what they will do if does. Could they order him back to Iraq?

Thanks to all of you who have made calls to the Commanding General at Fort Knox, Kentucky. The phones have been ringing off the walls there. Now it is time to make the phones ring at Fort Leonard Wood. Say hello to Fort Leonard Woods's brand new commander, Major General William McCoy, Jr., recently returned from the U.S. occupation of Iraq (you can read his emotional address upon assuming his new command at http://www.flw-guidon.com/).

We want to deliver one clear message:
RELEASE KYLE SNYDER WITHOUT ANY PUNISHMENT

For more information on Kyle's campaign and how you can support it, please visit the webiste of Courage To Resist, http://www.couragetoresist.org/. Monies are much needed and you can make an online donation there.

Last Friday, Nov. 3, Kyle was interviewed by Amy Goodman and Juan Gonzales on Democracy Now. You can watch or listen to this interview at http://www.democracynow.org/article.pl?sid=06/11/03/1431228. You can also read and/or download a written transcript.

Another Iraq war veteran and resister,Ivan Brobeck, returned from Canada on election day to the Marine base at Quantico, Virginia. Ivan was recruited into the Marines when he was 17 and fought in Iraq when he was only 19. Ivan is prepared to face a court martial, if necessary. The Marines have not yet decided what they will do with him. To read Ivan's open letter to President Bush, go to http://www.couragetoresist.org/ivanbrobeck/index.php?option=com_content&task=view&id=17

Below are links to two articles I have written about U.S. war resisters. They were published, respectively, by Z magazine and CCCO's Objector. The Z magazine article includes much of the Counseling Memo of the War Resisters Support Campaign in Canada (http://www.resisters.ca/), and the Objector article discusses the injustice of the military's handling of Conscientious Objectors.

Active duty GI's who have information and support will be more likely to follow their consciences and to obey international and U.S. laws against illegal wars and war crimes.

Supporting war resisters is more important than ever. Who else will hasten the end to the unjust, illegal, and unwinnable wars in Afghanistan and Iraq?

for peace and justice,
Gerry Condon