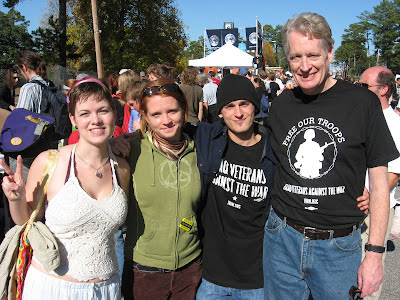 On Friday, February 23, police in Nelson, British Columbia entered the home of U.S. war resister Kyle Snyder without a search warrant or permission to enter. They had no warrant for Snyder’s arrest, but arrested him anyway. Treating him like a violent criminal, they did not even allow him dress into his clothes. They took him off to jail barefoot and wearing only boxer shorts and a bathrobe.

Kyle’s roommates, U.S. war resisters Ryan and Jenna Johnson, frantically started calling everyone they could think of, including the offices of MPs Alex Atamanenko and Bill Siksay, who intervened on his behalf. After Kyle was confined for six hours, Citizenship and Immigration Canada ordered Nelson police to release him.

Later that Friday evening, Joci Peri, an official at Citizenship and Immigration Canada in Vancouver, told Kyle that the U.S. Army had requested his arrest and deportation. What actually happened? Many serious questions remain unanswered.

Who ordered whom to arrest Kyle Snyder?
The current posture of the Nelson City Police seems aimed at keeping the people of Nelson from learning the truth about the arrest of Kyle Snyder. The initial article on the arrest in the Nelson Daily News (2/23/07) quotes NCP Chief Dan Maluta as saying the following:
“We got an order for detention which was our authority to hold that subject until he was dealt with by CBSA [Canada Border Services Agency]” Chief Maluta added that the order was issued by CBSA the same day police acted.

Technically speaking, the Chief’s carefully chosen words may be true. But is a detention order the same as an arrest warrant? And did the Canadian Border Services Agency request Kyle Snyder’s apprehension? Apparently not. A spokesperson for CBSA told several reporters that CBSA was called first by Nelson police, not the other way around. Then did the Nelson police call CBSA before or after apprehending Kyle Snyder?

It is now clear that the actions of the Nelson police were not prompted by either CBSA or Citizenship and Immigration Canada, who told them there was no legal basis for holding Kyle Snyder and ordered him released.

On Friday, March 2, the Nelson Daily News reported that:

Although Nelson City Police initially said officers acted on a detention order issued by Canada Border Services Agency (CBSA), Chief Maluta acknowledged Thursday that was not their original “source.” “We received information that this fellow was living in Nelson and may be illegally in Canada. We notified CBSA who said yes, we believe he is illegally in Canada and arrestable under the Immigration Act. So he was arrested and became the subject of the detention order which I mentioned previously,” said Maluta. When asked for his source, Maluta was mum. “I’m not at liberty to disclose how we found he was in Nelson because we don’t do that. We don’t disclose our sources,” he said.
Maluta would also not comment when the Nelson Daily News asked police if the source was from a Canadian or U.S. government body or agency or if it was a Canadian or American source. “I will neither confirm nor deny,” he said, before explaining why he could not reveal the source. “We want them to come forward so I’m not going to do anything to jeopardize [that] in the interest of law enforcement and in the interest of public safety.”

Maluta also said that there is no sovereignty issue involved with having accepted information from the police source.

“It does not affect Canadian sovereignty or the integrity of this police department to accept information on subjects who might be under investigation in Canada from outside sources whether that be the FBI, Interpol, U.S. Intelligence, Mexican police, whoever,” he said.

In this vein, there are several pieces of information that are of critical importance:

1) Did the Nelson police in fact arrest Kyle Snyder at the behest of the U.S. Army, as Kyle was told by Citizenship and Immigration Canada?
2) If so, what was the basis for the arrest?
3) Is it standard operating procedure for Canadian police to do the U.S. military’s bidding?
4) Is it legal for them to do so?

Growing Presence of U.S. Police Agents in Canada
If indeed, such contacts between the U.S. military and local police forces are routine, then the Canadian people have a right to know that. As MP Alex Atamanenko said at a community meeting last Wednesday in Nelson (quoted in the Nelson Daily News, 3/2/07):

“This could just be the tip of the iceberg. If in fact it’s true, why is a foreign police force or a foreign army allowed to contact our people and get them to arrest people in our country? That’s wrong. It’s an infringement on our sovereignty. It’s a whole issue that we have to look at step by step and try to get some answers from this government and change the policy.”

There is, in fact, a growing presence of U.S. police agents within Canada and a disturbing trend toward further “integration” of U.S. and Canadian police functions. See Mike Howell’s recent article in the Vancouver Courier. http://www.vancourier.com/issues07/023207/news/023207nn1.html

Not included in the article is Mike Howell’s interview with Scott Collins of U.S. Diplomatic Security, in which Collins says that one of the functions of his agency is to work with Canadian authorities to apprehend U.S. military deserters and return them to the U.S!

Illegal Arresting Procedures
There are several other aspects of Kyle Snyder’s arrest that deserve scrutiny. Nelson police had neither an arrest warrant nor a warrant to search Snyder’s home. They were not given permission to enter his home, but entered it anyway, illegally. And, as has been much discussed, they arrested Kyle, handcuffing his arms behind his back while he was in his boxer shorts, bathrobe and bare feet, and refusing his request to dress. Kyle was allowed to put on some clothes about a half hour later, after being booked and being in his cell for some time. But he remained in bare feet on the cold cement floor of his cell for six hours.

In the initial Nelson Daily News article (2/28/07), Chief Maluta had the following to say about the arresting procedure:

When order not to be made

46. (1) The Minister shall refuse to make a surrender order if the Minister is satisfied that

(b) the conduct in respect of which extradition is sought is a military offence that is not also an offence under criminal law; or

(c) the conduct in respect of which extradition is sought is a political offence or an offence of a political character.

In fact, every police agency in Canada needs to be educated about this section of Canada’s Extradiction Act. It is my understanding that MPs Alex Atamanenko (B.C. Southern Interior) and Bill Siksay (Burnaby, BC) are discussing how to pursue this goal at the federal level.

Iraq War Resisters Deserve a Safe Haven in Canada
Finally, we need to put this whole disturbing incident into its proper context. The U.S. Army, the same army that called the Nelson police, is currently pursuing an illegal war of aggression against the sovereign nation of Iraq. Well over a half million Iraqi men, women and children have been needlessly murdered, according to credible estimates.

The international community has repeatedly condemned the U.S. war and occupation of Iraq. And the American people have rejected it. According to recent polls, 6 of 10 Americans believe the war to be a mistake, and 6 of 10 Americans want to bring U.S. troops home. Only 13% of Americans support the current escalation of the war.

Those soldiers who refuse to participate in this bloodbath are, in fact, obeying international law. They deserve a safe haven in Canada. It is easy to understand why the U.S. Army does not want this to be so. But why would Canadian police act in support of this illegal U.S. war? It is time for the Canadian government to do the right thing and grant sanctuary to U.S. war resisters. Only a clearly articulated sanctuary policy will ensure that what happened to Kyle Snyder will never again happen to anyone else.


Gerry Condon went AWOL from the U.S. Army in 1969 after refusing to deploy to Vietnam. He lived for 3 years in Sweden and 3 years in Canada before returning to the U.S. to fight for amnesty for all war resisters. He now serves as Director of Project Safe Haven and has been working with U.S. war resisters in Canada for the last 3 years. He can be reached at ProjectSafeHaven@hotmail.com.