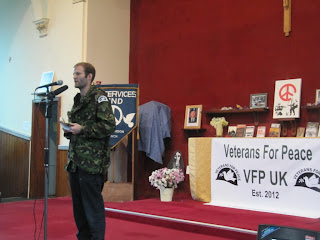 SAS Veteran Ben Griffin Addresses Inaugural Event of VFP UK
by Helen Jaccard and Gerry Condon
The first chapter of Veterans For Peace in the United Kingdom is now a reality. On a dreary “Easter Monday” afternoon in a working class section of London, England, veterans, allies, friends and families gathered for the inaugural event of Veterans For Peace UK.
The Guiseppe Conlon Catholic Worker House hosted the event in the sanctuary of an old church draped with banners proclaiming peace and justice. British and Scottish veterans, young and old, fresh from their first official meeting as a VFP chapter, testified in word and song that they will go to war no more.
Ben Griffin, a former self-described “gung-ho” SAS soldier who deployed to the wars in Iraq and Afghanistan, but then refused to deploy again, took the lead in pulling together a diverse group of veterans. He and several of the veterans have already been active for months, participating in Occupy London, and demonstrating solidarity with Wikilieaks founder Julian Assange and alleged Wikileaks whistle-blower, PFC Bradley Manning.
With the help of Ciaron O'Reilly of the Catholic Worker, they reached out to other veterans, including Bruce Kent, a Catholic priest, and John Lynes, both longtime peace activists whose military service was in the mid-1940's.
Folksinger and activist Jim Radford, a founding member of Ex-Service's Campaign for Nuclear Disarmament in the 1960's, sang a beautiful but sobering version of “Waltzin' Matilda,” the classic antiwar song from Australia.
Barry Ladendorf, president of the VFP chapter in San Diego, California, flew a very long way to be present on this historic occasion. When Barry was in London last year, he had attended a public meeting where he heard Ben Griffin speak about countering the influence of the military in British schools. Barry told Ben, “Hey, you ought to think about forming a Veterans For Peace chapter.” The seed was planted.
A large good-looking banner reading “Veterans For Peace UK, Established 2012” graced the altar of the church. Decorated with the VFP dove-on-helmet logo, the banner was sent by Gene Marx, VFP National Membership Coordinator, and a member of the Bellingham, Washington chapter. Gene had been maintaining regular communication with Ben leading up to the London launch. Ben and other veterans repeatedly said how much it meant to them to receive so much support and guidance from VFP members in the U.S.
Helen Jaccard and Gerry Condon of Veterans For Peace in the U.S. were also present at the festive launch of Veterans For Peace UK. London was the last stop on their seven-month journey around Europe, where they have networked with peace activists in many countries.
Gerry was invited to address the gathering about the importance of supporting Bradley Manning and all GI resisters. The UK VFP chapter doesn't need any nudging in this regard. Several of the founding members, including Ben Griffin and Michael Lyons, have resisted illegal wars and occupations while in the military.
“I was 18 years old when I joined the Navy,” said Michael Lyons. “It was economic conscription. I was told I could give medical aid. I spent about five years in Diego Garcia in the middle of the Indian Ocean. I started questioning the government, wondering, are we really the good guys? I learned Diego Garcia history and decided that I'm the bad guy here, supporting B-52 bombings and torture. I'm part of this.”
“I was told to go to Afghanistan,” continued Lyons. “I didn't buy the lies. Wikileaks came out and I knew that I couldn't be part of that.” Lyons applied for Conscientious Objector status but was sentenced to prison for seven months.
“Military prison was tough,” said Lyons. “I got support from Ben, Ciaron, my family, and strangers who sent my wife money and wrote to me every day.”
VFP UK is planning a vigil outside the U.S. Embassy in London on Tuesday, April 24, the beginning of three days of pre-trial hearings for Bradley Manning at Fort Meade, Maryland.
Gerry Condon said it was also important to remember and support U.S. war resisters who are underground in the U.S., or seeking sanctuary abroad, including Rodney Watson in Vancouver, BC, Kimberly Rivera in Toronto, Ontario, and André Shepherd in Munich, Germany.
At its first official chapter meeting, the UK veterans agreed to pursue three priorities; Nonviolent resistance to war; supporting war resisters, and countering militarism in society, including in schools and on Armistice Day.
“The military indoctrination of our youth begins long before the recruiter appears,” said Ben Griffin.
It looks like the first VFP chapter in the UK will do us all proud.
You can check out their website and say hello at www.veteransforpeace.org.uk
Posted by Soldier Say No! at 6:26 PM